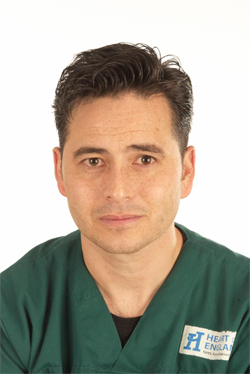 From 1999 to 2002 he won a three-year NHS Research & Development ‘Sheldon Fellowship’, and became a Clinical Research Fellow in the Health Protection Agency Antiviral Susceptibility Reference Unit within the Division of Immunity and Infection at the University of Birmingham. He obtained his PhD thesis in December 2002, entitled ‘The Sexual Transmission of HIV’.

In addition to his role as Medical Director of the national HIV testing awareness charity, Saving Lives, He is a Tri Service Consultant Advisor to HM Armed Forces and for the last 4 years has chaired the clinicians group for the DOH development of the HIV outpatient tariff.

He is West Midlands Media representative for the British Association of Sexual Health and HIV and regularly appears on television and radio to comment on issues pertaining to sexual health and HIV.

Outside of medicine, he is a level 1 qualified FA football coach and coaches the Leamington Juniors under 9s football team.